Friday Dec 12th
Happy Birthday James! I let James open up one little present in the morning, a set of spaceship toys / shuttle etc… and they played with that while I was decorating, and cooking. We ended up with enough cookies to take around to H/VT people. When Doug got home we went caroling / gave away cookies. We could use some more practice singing, but the kids had fun, looking at more Christmas lights etc. Finally, after an hour of driving cookies around – James was getting a little worried, but we finally made it to Chuckie-Cheese (James’ choice). We did all the race car rides, the big rocking horse, and avoided all the gambling games. Horrible that they should make games for kids that are just like slot machines etc. Made it home, and let James open up gifts from Nammy and grGmpa Moose which were a big hit.

Saturday Dec 13th
This morning I let Doug sleep in and have a morning with the kids while I went on the missionary blitz. It was nice morning out. As soon as I got home handing our church stuff out, I saw another group walking down the street, and then a third group – JW’s at our door. I told them that we did not believe in the trinity either, and they smiled and left us with a watchtower. I got home in time for Doug to have his Saturday outing, Heather’s turn this week. Did laundry, cleaned up the house for James big party. 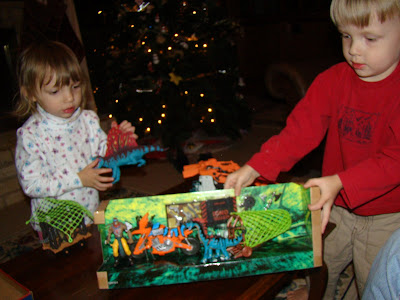 Cool dino toys! (Almost as fun as the bubble wrap!) 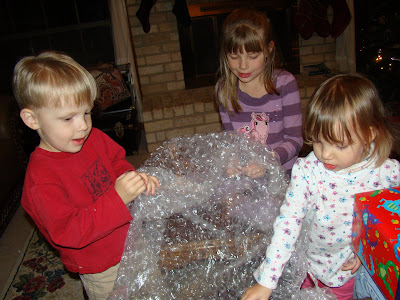 Well, 3 and 4 year olds sure know how to party! Poor Warren, James had his present open before he could even get in the door. I got it away again, put the stuffing back in the bag, and talked him into waiting until after the cake. Khi-Khi poured his juice into his party hat. Mary asked and asked for the piece of cake with the #4 candle on it, so I gave it to her, then she said she did not like her cake… later on I found the #4 candle with a big bite out of it. Melissa told us that Crystal was sneaking something. We asked what did she get into? Melissa (her older sister) said I don’t know, but she has that look on her face. We never did find out what Crystal got into, but she definitely had the look of someone with a guilty conscious. Opening presents was of course a mad house. It started at the table, then moved onto the floor, and then out into the living room. I gave up trying to sort it all out. The kids already had way too much sugar, and top that with a bunch of new toys, everyone just a little over stimulated. Of course one of the presents broke in the first five minutes of kids all tug-of-warring over it. I told the giver of the present that we just had to get some more batteries for it so they would not feel bad (I think I might be able to fix it). We did a dinosaur hunt and decorated (and ate) gingerbread cookies. Lots of girls, Warren and Khi-Khi were the only boys. 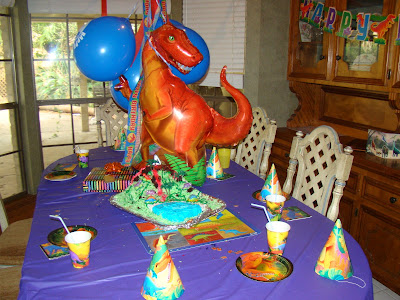 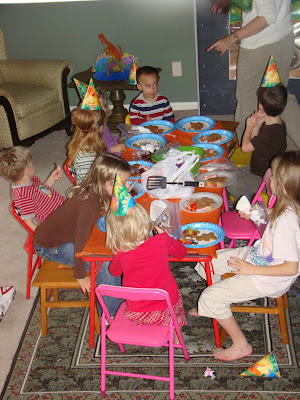 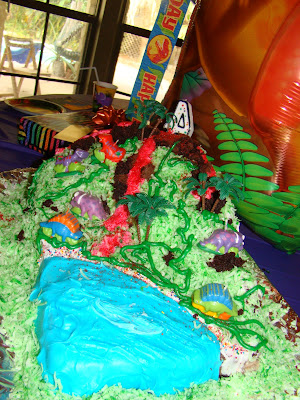 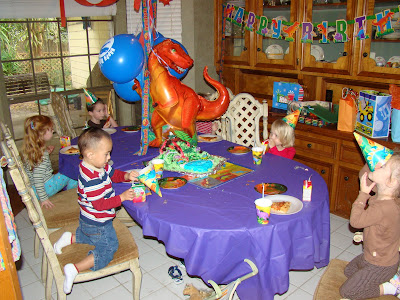 pouring juice into and drinking out of party hats :) 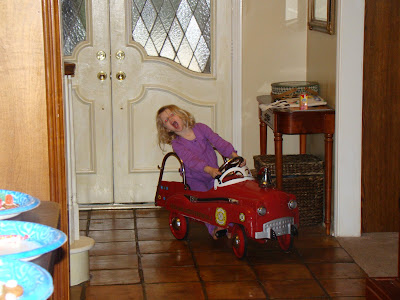 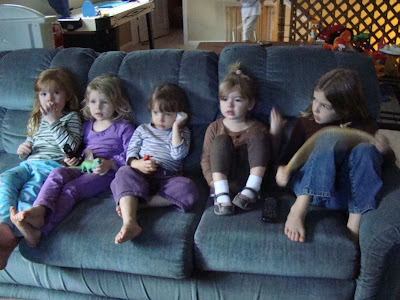 Almost all the girls (Heather and Lilly missing from pict). 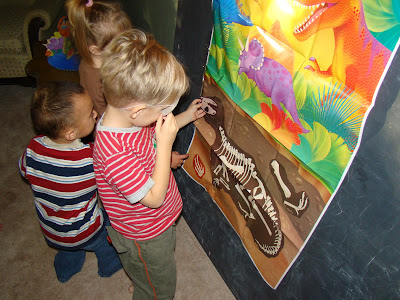 It's hard not to peek! 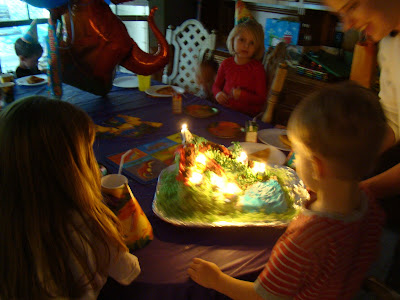 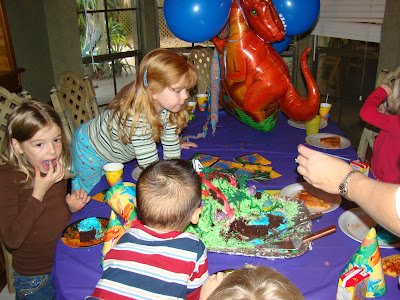 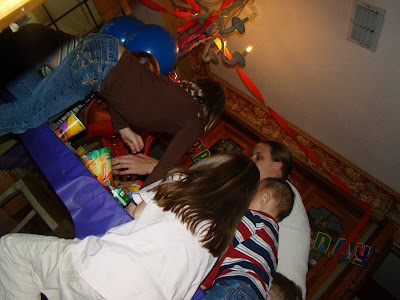 Cake time! Yes, sometimes it helps to climb up onto the top of the table to get a better view of things. It was a dino cake with a mountain/volcano (made up mostly of frosting – most of the kids only eat the frosting anyways) with a little blue lake at the bottom. With al the candles lit it was quite a sight!
Posted by Jamie at 6:48 PM 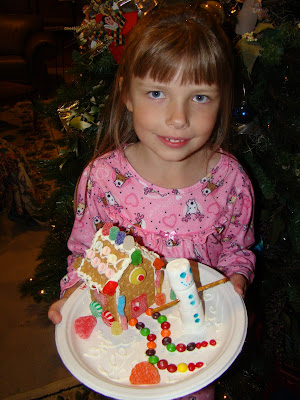 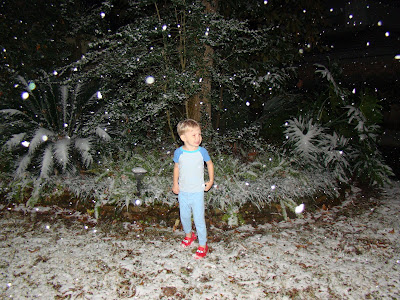 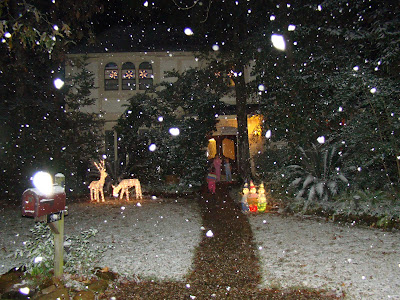 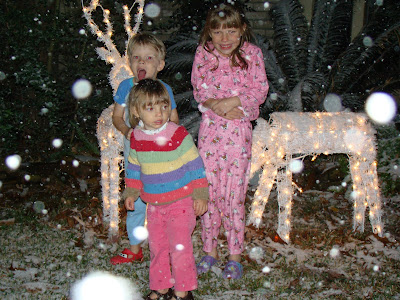 Wed Dec 10th
Snow! In Kingwood! Who would have thought? It started around 3:30, right after we dropped Heather off at girl scouts. It turned from rain, to little hails, to snow! We were driving around up to New Caney for a Kingwoodyardsale thing, it was really neat to see it! We stopped at Holleywood video to get Heather’s teacher a gift card, and everyone who worked there was outside just watching it fall. James said the snow was “embarrassing”. He gets these new big words, and then just has to use them somewhere. It did not start sticking until later, after it was dark. We let the kids stay up late to see it. the new neighbors were out in it too. Just last Saturday their daughter was out working in the yard, she told me she had never seen snow, they wanted to go to Colorado for Christmas too, but are unable too. I’m glad it snowed for her.

This morning Jessica watched the kids so I could go to school with Heather to make Ginger bread houses. I got stuff so that James and Autumn can make their tomorrow with their joy school group. It was a fun project. Little Autumn really really wanted to eat Heather’s house. She cried and cried to see it, then cried some more doing sign-language putting her hand in her mouth showing she wanted to eat it. Poor Autumn. We will see how it goes tomorrow!
Posted by Jamie at 7:02 PM

Tonight we went to the Nativity exhibit at the church. everyone brings their nativities in to display, and local schools come in with their orchestras and choirs and do music. After we went to the church we drove around in the neighborhoods looking at Christmas lights. It's Christmas time in Kingwod! When we saw a really good house, Doug would say, look - Christmas fell on that house! I did not get any really good picts, too dark, and no one wanted to stop the car for long enough to get a good one. The little deer are in front of our place, we have 2 deer, some singing snowmen, and snowflakes in our windows. Not much compared to other houses, but a little bit! Doug is figuring out timers so we can leave them going when we are in Colorado. 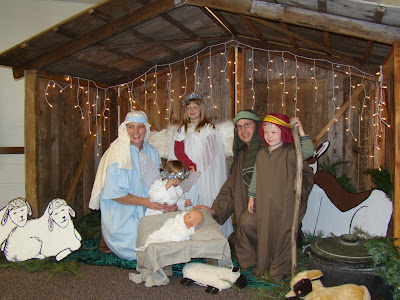 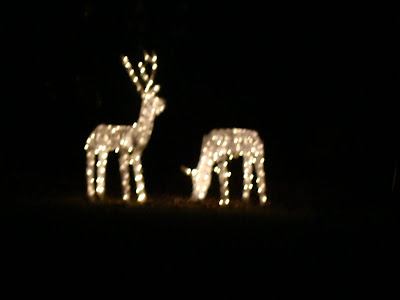 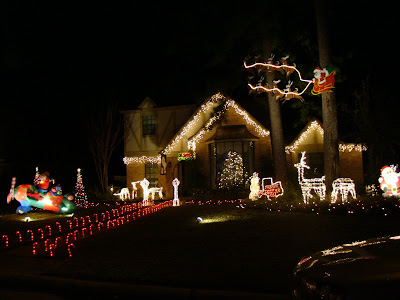 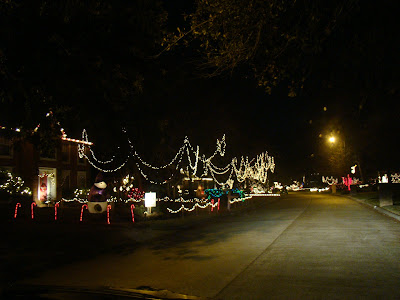 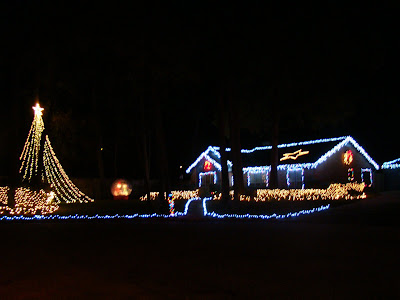