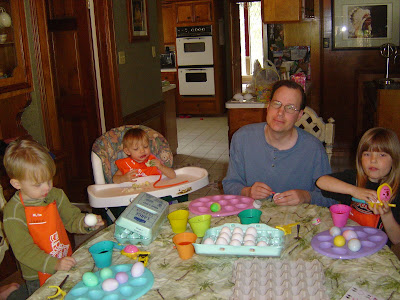 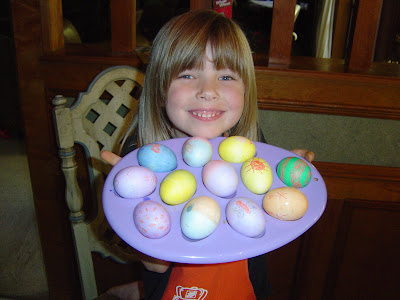 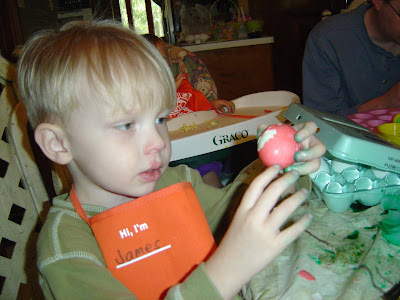 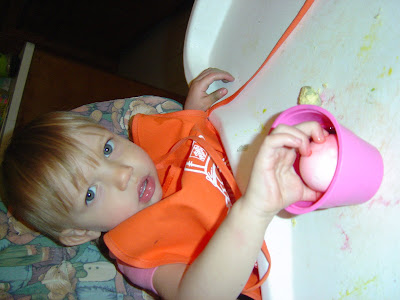 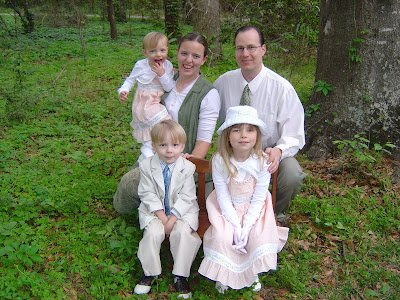 Have not journaled in awhile. Let’s see

previous week Doug out of town in Canada.
Thursday March 13th – Open house at Heather’s school – Doug out of town in Colorado, so just the kids and I went. Put Autumn in a backpack, seemed to work pretty well. They had a little science fair set upin the cafeteria, and Heather’s work displayed in the classroom. Heather is no longer sitting with Jake – he is now at his own table with one other little boy. Heather’s work was very good – they all made astronauts by tracing their bodies on paper, and blowing up a picture of their face to put inside of a drawn helmet. They turned out really cute. There were sponge paintings, and other picture. Heather seems to be doing very well. We did some gardening, planted a bunch of ferns in the front. Some ferns were taking over that little patch anyways, so just filled it in a bit more.

March 14th Easter party at Heather’s school. Using the backpack, we all ventured to go again. They had an egg hunt out in the playground, then inside for crafts and snacks. I missed some of Heather’s other class parties because I did not think it would be good to take Autumn/James along and had no one to baby-sit. This one was ok because it was outside. Wish I was able to go to more stuff with Heather at school. A weekend without Doug, we got pizza and watched a movie as usual. Weather is nice, fixed the bike trailer, have been using the greenbelt again to get to/from school which is good.

March 17-21th
Heather’s Spring Break. Doug had to work because he had been out of the office for awhile, so no fancy trips, just relaxing at home. Poor Nammy, she was going to come out Tuesday morning but the flight was canceled – she drove back and forth to the airport, did not end up making it out until Tuesday night at midnight, but she still came! I told the kids not to wake her up, let her sleep. Heather asked – can we just go look at her? Dropped Doug off at the park-n-ride, and the kids snuck down – Heather stood next to Nammy breathing heavily until nammy woke up – I guess she would not get in trouble for just breathing right? We went to the zoo, a nice day out, then picked up Doug on the way home. Next day, walked to the park. James trying to ride his bike, Heather on her scooter, Autumn and stuff in the wagon, and Chaco. Quite a process to get everyone down the greenbelt – James needed a little push every now and then, Heather fell off the scooter twice, skinned up both her knees, little Autumn walked a bit of the way, but did not want to go the same direction as everyone else, so ended up having to strap her into the wagon for part of the trip, which she did not like very much. Made it to the park though. Heather had a couple of Easter eggs left over from the class party, which she insisted we all play Easter egg hunt over and over again. Stayed at the park for a while, then made it all the way back home. Went to taco bell for lunch, then drop mom back off at the airport. A quick visit, but nice too see her. Kids are already anticipating Nammy coming back for Heather’s birthday.

March 22nd
Nice outside, the pool is clear – so we went swimming – the water was cold, ended up putting on the heater. Ate dinner in the spa. James and Autumn may be getting sick, James up coughing all night last night…

March 23rd
Happy Easter! Got up, tried to get everyone ready for 8:30AM church while at the same time letting them go through Easter baskets. Were able to get dressed, and a few picts taken out in the front before leaving. A neighbor came over and helped us get pictures. I think it was the same neighbor who gave us the cross for our yard. Everyone on our could-e-sac has the white crosses up – this morning we all turned them around to say “He is risen”. Went to church, the kids – Heather and James this year too, went up to sing a little primary song. Autumn #2 week in nursery. They did not end up needing a sub after all, so I was able to go to class. Home again, kids went on Easter egg hunt, then colored Easter eggs, had fish and cuscus asparagus for dinner – plus grape juice, bread, some little appetizer things. Tried to make it a Mediterranean meal this year instead of the traditional ham. Just us for Easter this year – no extras, but it was nice.
Posted by Jamie at 5:40 PM No comments: