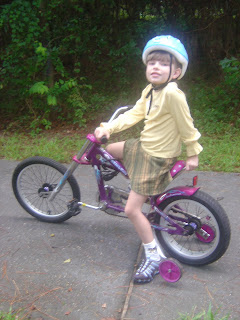 Monday August 27th
Heather’s first day of kindergarten! Heather rode her bike while I pushed the stroller with James and Autumn. We were able to walk her to her classroom. We picked her up at 1:50 and got the report. I asked what they learned in class, and Heather said they learned rules – don’t be late, don’t tip over the chairs, don’t tip over the table, and don’t play on the monkey bars because 2 other kindergarteners broke their arms on them. I sent her with an extra box of raisins to share, and she found a little girl to share them with, although she did not remember anyone’s name. They played dress up, played with animal babies. Little James, Autumn and I read books, and went swimming. I tried to get James to swim without his float suit. Doug is in Canada, so it was just us for dinner. Early bedtime so they can get up early.

Tuesday Aug 28th
This morning Heather impressed some other students by riding her bike all the way up the hill without stopping (as they had). A little girl looked Heather and her bike over, and said she thought any girl would kill to have a bike like that. Heather was happy for the compliment. Later that day Heather came back to class from the bathroom, and everyone was gone. They were just in the next classroom watching a short film, but Heather did not know it, looked everywhere for them, and ended up sitting in her seat alone crying. Mrs. Welch was nice to her, and apologized for not knowing she was gone. Poor little Heather – the trauma was short lived, and she is still excited about going to school.

Wednesday August 29th 2007
Piced up Doug from the airport, and then got Heather from school. It was raining, so instead of walking we picked her up in the car. There was a long line of cars waiting. Heather had an upset look on her face – we found out that they had made cookies, sent them to be cooked, and then the cookies disappeared. There was rumors about a bear possibly taking them, some cookie crumbs being found – but no cookies. They went home to make a map and think about how to track down the cookies. Sounded like a lot of fun.

Thursday Aug 30th
While doing Heather’s hair for school, found lice, so had to keep her home. Texas is so bad for bugs. We have been swimming, and giving the kids baths just about every day, and still, we end up with this. Heather was really upset, she was really looking forward to tracking down the bear and finding the cookies, now she has to miss it. Instead we went to the store, and had a long day of cleaning the house, car, and heads. $70 worth of shampoo, gels, combs, spray – and this will not be the last of it. So frustrating. I let Heather watch movies, and tried to make her feel better about having to stay home. I almost just sent her, but if they found her scratching her head at school, it could have been an even worse experience for her. The house got cleaned anyways.

Friday Aug 31st
The lice seem to be gone for now – so back to school. Heather asked Mrs. Welch if they found the cookies, and cried when she found out all the fun she missed. Some boys in Heather’s class were playing on the monkey bars when there not supposed to, and they got stung by wasps after they stuck sticks into a wasp nest. Heather said something like “boys are not very smart, are they?” I said boys can be smart too, they just like to play differently. I have been reading with James, we went through a book about mammals, and then a book on fish. There are some crazy critters out there! We ordered pizza in, looking forward to a nice 3 day weekend.

Saturday Sept 1st
Made waffles and scrambled eggs, then off to Haden’s birthday party. James had wrapped up some airplanes that both he and I had trouble giving up. He did well giving up the present – he was excited to be able to give it to Haden, and was smiling when he gave it to him. He spent the party playing with new toys. It is always hard to pry him away from new place. Janee and Holly were the only adults I knew at the party – I think the rest of the people there were family members. I was never a jock in school, and am always a little uncomfortable around a well dressed, died hair crowd. I am trying to better at being social. I talked to Haden’s grandfather a bit at least. Doug is working on the back room, finishing up the steps so a floor can be put down. It would be really nice to finally get that room finished up!
Posted by Jamie at 11:53 AM No comments: